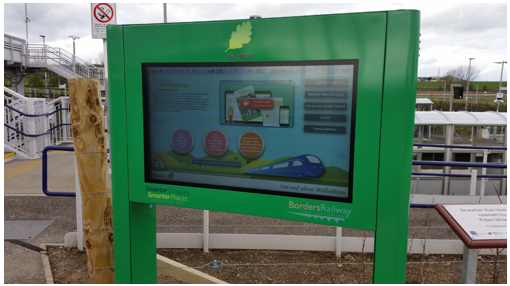 The Borders Rail project saw 7 new stations opening in September 2015, with 4 in Midlothian and 3 in Scottish Borders, neither council area having had any train service since the 1960s. This was the biggest rail project in the UK over the past 100 years.

Midlothian Council wanted to provide mapping information showing local walking/cycling links and bus routes in order to encourage users to travel actively and sustainably from home to the stations and local facilities.

As such, Midlothian Council appointed Cammax as the primary contractor for delivering interactive outdoor kiosks which were deployed as a means of providing access to maps titled ‘Out & About Midlothian’ and ‘Out & About Scottish Borders’ with future plans to cover further areas with similar map projects using the same title.