Vending machines giving out free condoms, chlamydia tests and information on drug abuse are being put into schools in Birmingham. The programme will start with two schools in the city and four more across the West Midlands. 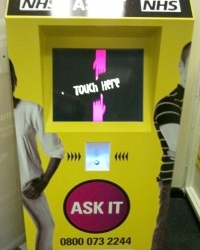 It is all part of a campaign aimed at boosting awareness of the wide range of contraception choices available. Sexual health workers believe Birmingham has the potential to be Europe’s worst sexual health hotspot, as shown by the latest teenage pregnancy figures – where the rate of under-16s conceptions in the city is 25% above the national average.

The Discuss It. Choose It. Use It campaign aims to stress to young people that there are 15 different forms of contraception available – many of them much more effective than the traditional condom or oral contraceptive. These include implants, progesterone injections and the Intrauterine Device/System (the coil).

In fact, the National Institute for Clinical Excellence (NICE) showed that on average 80 unplanned pregnancies within 1000 were due to failures from oral contraception or condom, compared to 1 or 2 in 1000 caused by the failure of other forms.

The vending machines work by recognising students’ thumb-prints, and dispensing a rationed number of condoms over a period of time. However, this is only available to over-16s who have first registered with a sexual health advisor to talk through all the other options first.

The machines are being introduced by a company called Medivend to Bournville College and Cadbury College in Birmingham, with another four being introduced to other schools across the West Midlands. Stephanie Taylor is Project Manager of Medivend, which have been tested in Sunderland and Hull already, and says parents should not see this as a threat.

“Young adults are going to have sex, whatever. It’s better that they’re safe when they do it, rather than just going out and doing it without any of that information. It’s not just free condoms, it’s sensible advice about sex without being ‘preachy’ – it’s not telling you not to, it’s just telling you the best way to approach it.”

Kizzie is from Erdington and has been part of the Discuss It. Choose It. Use It campaign for the last couple of years. She is convinced it will get the safe sex message through to young people here.

“It was made by young people for young people, so it’s information that we want to know and it’s easy and accessible… We want them to notice it and think ‘what is that?’ and go over there and start playing on it with a group of friends. Then when they you feel comfortable, they will go up on their own. So we don’t want to see it sit in the corner and be ignored.”