With the exponential growth in technology over the past ten years people have come to expect more from a kiosk system. So much so, we’re now seeing kiosk technology play more of an integral role in public service sectors.

Cammax developed and deployed cutting edge kiosk technology to assist staff who deal with visitors on a front-of-office basis – as well as those police officers who handle people in the custody suite.

In the run up to the London Olympics it was predicted that around 4.3 million people from all over the world would be visiting the capital; for many of those visitors English would not be their first language. This presented a huge communication challenge for the Metropolitan Police.

The problem with human translations is that it’s not only timely (an interpreting session can take between 15 to 20 minutes), but it’s also very costly. This means that a simple problem or query could cost far more than is necessary, in both time and money.

The reality is that not every visitor at a police station is under arrest. Many go to the police station because they have lost something or have had something stolen. It became clear that the Metropolitan Police would need a more efficient way to communicate with these people.

Working closely with the London Metropolitan Police Service, Cammax deployed a cutting edge multi-lingual kiosk system that would act as an initial contact solution for the police; in a bit to assist foreign language speakers.

Cammax developed a dual-screen system that uses 256-bit SSL encryption for the transmission of data. The first screen is normally manned by the police office and the second is for the interviewee. In use, the police officer drives the conversation forward, using a system that is menu-based with a tree and branch format.

With over 300 languages spoken in London, Cammax’s kiosk system was designed to support the top 20 languages in detail (covering approximately 90% of language requirements), and 100 languages in total. All of the kiosks are also available in a spoken and word format, just in case the interviewee could not read. On top of this the multi-lingual kiosk system is also very useful in aiding the deaf and hard of hearing. Via a unique interface members of the Deaf Community are able to select their preferred method of communication; whether that’s lip reading, written notes, or an extensive set of Sign Language video questions and responses. 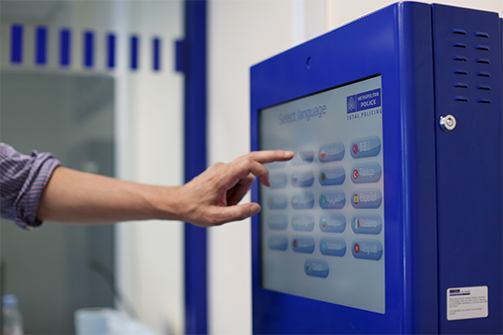 With such flexibility, the multi-lingual kiosks proved very useful for police officers and visitors during the 2012 London Olympic Games; making life a lot easier and a lot less stressful for all parties concerned.

Moving on from the Olympics, the technology is providing ongoing support by engaging with incredibly diverse communities across London. Multi-lingual kiosks comply with the Police & Criminal Evidence Act (PACE), which states that the arresting officer must explain – in their own language – why they are arresting someone. Under the Human Rights Act, the person in question must understand why they are being arrested.