City of York Council’s (CYC) first project with Cammax was a deployment of 11 ITSO Smart Outdoor Card Dispensing Kiosks for all six Park and Ride sites throughout York. This included key Park & Ride sites such as Grimston Bar, Monks Cross and McArthur Glen Designer Outlet Park and Ride. It was essential that these initial 11 kiosks were successful for York as their Park and Ride is one of the most successful Park and Ride systems in the country.

Cammax worked closely with the Council to design a bespoke application with a unique interface which was specific to the Council and made the user experience for Park and Ride passengers as simple and efficient to use as possible.

Due to the high volume of Park and Ride passengers, compared to normal City Centre bus stops, it was essential that the ticketing interface enabled customers to purchase the correct ticket in the shortest time possible. In order to achieve this, a highly graphical interface was deployed with simple instructions and ticket choices. 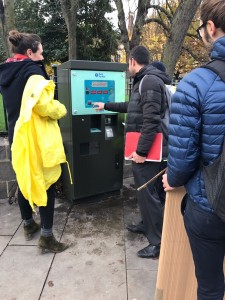 Whilst developing the application, Cammax worked openly with York Council in order to develop the Ticketing application in such a way that future configurations and changes can be managed via the Council instead of requiring modifications to the application.

Once these kiosks had been deployed for a period and deemed a success, CYC then placed an order for an additional 5 kiosks to be located in prime City Centre locations. All these kiosks are able to dispense and sell All York tickets including Day, Weekly, Monthly, Annual Tickets as well as all the required Park and Ride Tickets.

In addition to the kiosks, CYC also procured the Smart Retail Point (SRP) which Cammax initially developed for SYPTE. The SRP is a desktop POS management application which allows the PTE or Third Party agent to sell and/or manage cards via an existing PC or standalone Epos unit.

CYC conducted their own end to end testing with First Bus Operator and their ETMs (Electronic Ticket Machines). The first stage was to bring the bus ETMs to Cammax Head Office in order to test that product creation/ modification and consumption was behaving correctly. We also assisted with additional testing once the kiosks were on site by mapping the customer journey from purchasing a product from our ITSO retail device, using the products on a bus and ensuring the travel was being recorded correctly. By doing this Cammax and our customers were able to provide full end to end testing.

Smartcard kiosks are now positioned at key bus stops in the city centre and at Park & Ride sites. Passengers can use the kiosks to pay for their journeys or check what is already on their card. ‘Park & Ride’, First York, Transdev, Cityzap and Coastliner tickets will be available for purchase alongside ‘All York’ tickets which are valid on all operators’ buses within the City of York area.

Following the successful deployment of the kiosks, the York by Bus smartcard scheme was officially introduced amidst much excitement. Cllr Ian Gillies, Executive Member for Transport and Planning for CYC, said: “The introduction of the ‘York by bus’ smartcard will allow passengers to simply tap and go when they board the bus. We hope that this will make bus travel even more attractive and further boost bus passenger numbers.”

Managing Director of First Bus York, Marc Bichemann, was also quick to herald the success of the TVM’s and the smartcards: “I think it will make bus travel a lot easier. People can be a lot more flexible with their tickets and it will make boarding quicker. Rather than having to pay cash for the bus and fumbling for the right coins it makes it a lot easier for our drivers and for the customers. Just tap your card and away you go”.

Cammax are also currently working with York to add the new “First” tickets and TransDev products into the list of available tickets dispensed by the TVM.

As with all our TVM customers, we continue to work closely with the Council and we are constantly developing and upgrading the application in order to provide a constantly improving and adapting application which continues to meet all their Smart Ticketing requirements.